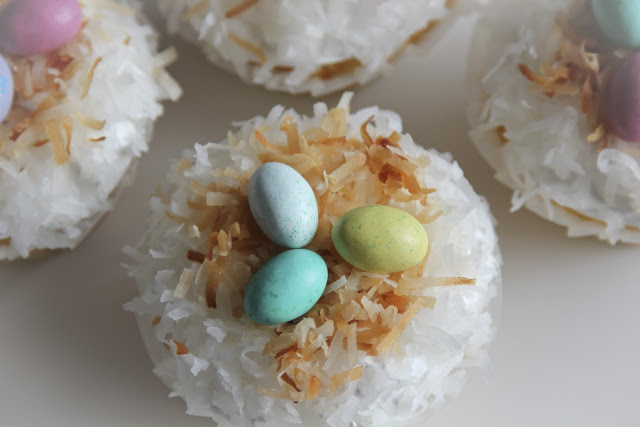 A couple of days ago I was trying to come up with a dessert to make for Easter. I wanted to do something with carrot, lemon or coconut. Then I remembered that I had some coconut left over from making this ice cream, and thought it would be just the right amount to make cupcakes. I made seven-minute frosting instead of a buttercream to give it a lighter consistency. And of course, it being Easter, I had to do something a little extra to make these cupcakes special, so I toasted some coconut to make a nest, and then topped them off with some speckled coconut M&M’s eggs.

DIRECTIONS:
1. Preheat oven to 325 degrees. Line a muffin tin with 12 liners, set aside.
2. In the bowl of a stand mixer, cream butter and sugar on high speed until light and fluffy (about 3-5 minutes). Turn speed down to low, add the eggs, one at a time, and then the egg white, scraping down the bowl after each addition. Add the vanilla extract and coconut oil, mix for 30 seconds.
3. In a separate bowl, whisk together flour, baking powder, baking soda, and salt. Slowly add the dry ingredient mixture to the wet ingredients, alternating additions with the buttermilk. Mix until just combined (you do not want to over mix your batter). Remove bowl from stand mixer, fold in coconut.
4. Fill each liner ¾ of the way full. Bake for 25-30 minutes, or until the tops begin to brown and a cake tester inserted into the center of the cupcake comes out clean. Remove from oven, let cool for 10 minutes, then transfer cupcakes to a wire rack to cool completely.
5. While cupcakes are cooling, prepare frosting. In a small saucepan, bring sugar, salt, corn syrup and water to a boil. Boil for 3-4 minutes or until a candy thermometer reads 200 degrees.
6. In the bowl of a stand mixer (with the whisk attachment on), beat egg whites and cream of tartar until foamy. Slowly pour the hot sugar mixture in. Continue to beat for 7 minutes or until stiff peaks begin to form. Add vanilla extract. Beat for an additional minute or so.
7. Spread frosting on top of cupcakes, then top with coconut.*
*To toast coconut, turn oven to 350 degrees. Spread coconut on a rimmed baking sheet. Place in oven for 5-10 minutes, stirring once or twice. Remove when flakes are golden brown.

Get our latest & greatest recipes in your inbox.