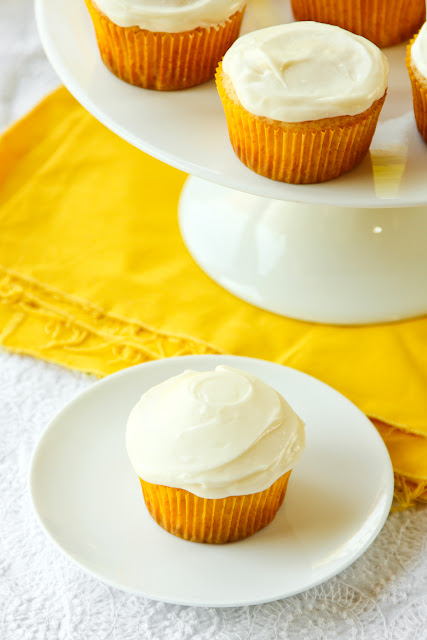 Yep. I’m finally saying goodbye to summer with these lovely pineapple cupcakes. You see a couple of weeks ago Stephen asked me to make him cupcakes. Not chocolate or vanilla, but pineapple. I was a little surprised. Pineapple, really? I had never heard of just plain ole pineapple cupcakes. I’ve see piña colada cupcakes, and with those most of their flavor is derived from the coconut. I thought a little about how I could make these cupcakes flavorful. That was when I remembered seeing pineapple cream cheese at the grocery store… of course, that would make an excellent frosting. Then it just came down to getting some flavor into the cupcake. By keeping most of the juice from the crushed pineapple and pureeing all of it, the cupcake would then be sweet and flavorful, eliminating any stringyness you might otherwise get if you didn’t puree the pineapple. So I whipped up the batter, scooped it, tossed the pan in the oven and watched them bake. 10 minutes had passed and I grew nervous. No pineapple smell. Finally after about 18 minutes I could smell it. Hooray! I took them out, let them cool and frosted them. Stephen immediately appeared in the kitchen (he had been studying somewhere in the house) and snatched one up. We both agreed that these were a little taste of summer, perhaps our last. So with that, I’m officially moving onto Fall. Seriously. I have a feeling you’re going to like what I have planned for these next few months, it involves a whole lot of sweet potatoes, pumpkin, peaches, apples and berries!