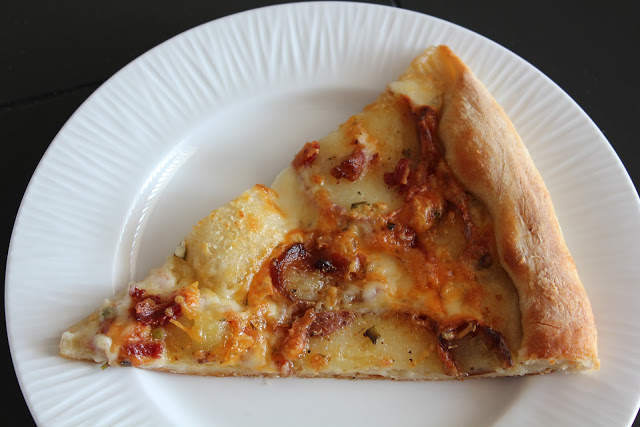 I know what you’re thinking. A baked potato pizza, really? But trust me, it is really good. When Stephen and I were living in Provo we went to a pizza buffet for dinner with friends. Some of you may know which one I’m talking about- The Pizza Pie Cafe. Although I’m not a huge fan of buffets, this one is actually pretty legit. Anyway, because it first started in Idaho, they have a pizza called the Spud-O-Licious. It’s definitely not a traditional pizza but it is packed full of flavor and is mighty tasty. So if you’re feeling a little adventurous and are tired of tomato-based pizzas, give it a try!

DIRECTIONS:
1. Preheat oven to 500 degrees. Prepare crust by rolling it onto a lightly greased and floured pizza pan.
2. Spread ranch dressing or sauce over the pizza peel, leaving about 1 ½ inches around the edge for the crust.
3. In a small bowl, toss the potato slices with the butter, garlic powder, rosemary, salt and pepper.
4. Sprinkle half of the cheese mixture over the pizza. Then place the potato slices over the cheese. Sprinkle remaining cheese as well as the bacon and green onions on top.
5. Bake for 10-15 minutes (during the last 2-3 minutes, you can turn the oven onto broil if you want to get things nice and crispy). Remove, let cool for 5 minutes, slice and serve.
Stephen + Natalie | Makes approximately 1 (10″-14″) pizza

Wife, mother, baker and photographer. Recipe developer & author of Life Made Simple. A self-professed peanut butter lover and fond of anything that involves pumpkin, cookie dough, or sprinkles

I have a serious sweet tooth and a passion for food photography. Welcome to my happy place!