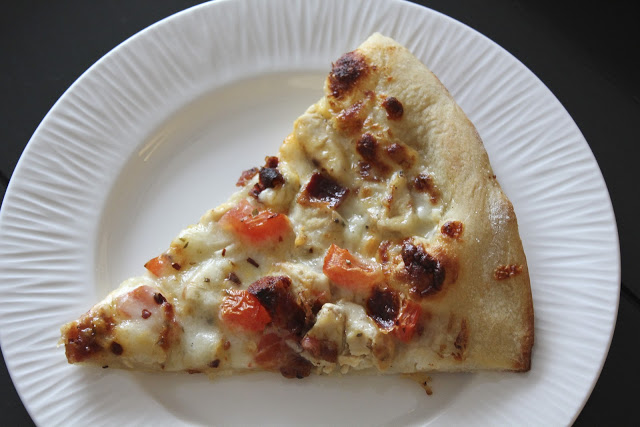 Last Monday when I was checking out at the grocery store I noticed Bon Appétit’s latest issue. As corny as it sounds, the cover really hooked me. You see, I’ve been searching for about 3 years now for the perfect pizza crust. After probably a dozen failed attempts, I thought I would never ever ever find one that both Stephen and I were satisfied with. Is a non-breadlike dough that produces a crispy crust too much to ask for? I thought so, until I tried this recipe. It’s kind of a strange one. In fact, it boggles my mind a bit. Only a ¼ tsp. of yeast, no sugar, and no kneading, really? And just four ingredients? But I made it, thinking that once again I’d be incredibly disappointed and yet at the same time really hoping it would be amazing, and it was! There’s something about the letting the dough ferment for 18+ hours that really makes it spectacular. Plus you can make it ahead and keep it in the refrigerator for up to 3 days.
We made (2) 14″ pizzas: a pepperoni one on Monday, and a chicken bacon ranch one yesterday. I was inspired by my former room mate Mandy’s recipe over at Baking with Blondie. It reminds me of a pizza from the Brick Oven in Provo. Stephen was really skeptical about the sauce (and probably everything else on the pizza), but he really loved it and so did I! It’s a nice break from the norm, and since we ate the whole thing in minutes, I’d say it’s a keeper.

DIRECTIONS:
1. Whisk flour, salt and yeast in a medium bowl. While stirring with a wooded spoon, gradually add water, stir until incorporated. Mix dough gently and form into a rough ball. Transfer to a large clean (ungreased) bowl. Cover with plastic wrap and let dough rise in a draft-free area at room temperature until surface of dough is covered with tiny bubbles and the dough has more than doubled in size. This usually takes about 18 hours or so. Transfer dough to a well-floured surface. Shape into a square or rectangle and divide in two. One portion at a time, take the corners and fold under, creating a ball. Dust dough with flour and set aside. Cover with plastic wrap and repeat with remaining dough (at this point you can toss one in the refrigerator in a ziplock bag if you are not going to use it that day or night, remove 2-3 hours before and cover with flour and plastic wrap). Allow dough to rest for 1 more hour.
2. To make the pizza peel, during the last 45 minutes of the dough’s resting, turn on your oven to 500 degrees. This way the oven will be hot and ready for the pizza. If you are using a pizza stone, place it in the oven while it is preheating, if you are using a pizza pan or baking sheet you do not have to heat it before hand.
3. Working on a floured surface, dust dough generously with flour. Gently shape dough into a 12″-14″ disk, keeping in mind it doesn’t have to be perfectly round. The article mentions not using a rolling pin, this forces the bubbles out and makes a really flat hard pizza, so by using your hands and fists, shape it that way. Place onto a floured (or cornmeal/flour combo) baking surface. Top with desired toppings and bake for 5-7 minutes on a pizza stone or 10-12 minutes on a baking sheet or pizza pan. Slice and enjoy!
*Note: this is a half recipe, it makes (2) 12″-14″ pizzas

Mexican Corn on the Cob

Wife, mother, baker and photographer. Recipe developer & author of Life Made Simple. A self-professed peanut butter lover and fond of anything that involves pumpkin, cookie dough, or sprinkles

I have a serious sweet tooth and a passion for food photography. Welcome to my happy place!